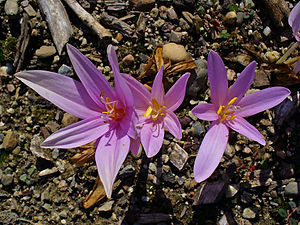 Colchicine gout treatment has been around for about 2,000 years, for much of that time it was the only treatment prescribed for gout treatment. Available in tablet form since 1936
It is derived from the dried seeds, or bulb, of the autumn crocus (meadow saffron) plant. Don’t be fooled however as the plant itself is very poisonous and there is no known antidote. In fact, colchicine is a highly toxic substance.  People have died from ingesting just 6 mg of it.   That said for over 2000 years it was the only drug that doctors had at their disposal that actually worked against gout but that all changed about 60 years ago. The arrival of non-steroidal anti-inflammatory drugs (NSAIDs) and corticosteroids, meant doctors had much more powerful means of controlling the pain inducing inflammation of gout.
However, colchicine does still come into use in certain circumstances.  NSAIDs and corticosteroids do have risks and people with heart problems or gastrointestinal problems (including ulcers) should not take NSAIDs. Also anyone with infections or at risk of infection should not take corticosteroids.  In these cases, colchicine can be used as an alternative.
It is for this reason that emergency room doctors often give colchicine rather than other medications – it is safer when a patient’s medical history is uncertain.  If a patient “forgot” to tell an ER doctor about their ulcers or heart condition, then that patient could be seriously injured or even die, if prescribed with NSAIDs “so why take the chance?  Instead the doctors will prescribe the less effective but safer colchicine,” and rightly so.
The exact mechanism or action of colchicine is not known. It may involve reduction in crystallization of uric acid leading to a reduction in the inflammatory response. Colchicine is not an analgesic (pain killer), but it reduces pain caused by gout.
The key to stopping gout attacks is to lower uric acid levels in the body. When you first start lowering uric acid levels, gout attacks will actually increase as “pools” of uric acid in your body dissolve and “move” out of the body.  This very often causes strong fluctuations in uric acid levels in your body that can trigger attacks.  In this case, colchicine can be used as a daily “prophylaxis” to prevent these attacks for anywhere from 3-12 months.  After that time, it should be discontinued and hopefully, will not be needed ever again.
Note: If you use a daily dose of colchicine, you should NOT also use it to treat an attack!  The risk of overdose is too high!

PRESCRIPTION: Yes
PREPARATIONS: Tablets: 0.6 mg
STORAGE: Colchicine should be stored between 20 and 25 C (68-77 F)
PRESCRIBED FOR: Colchicine is used for the treatment of acute flares of gout. It also is used for treating FMF in adults and children 4 years of age or older. Other unapproved uses of colchicine include treatment of pseudogout, amyloidosis, and scleroderma. These unapproved uses of colchicine require further evaluation
DOSING:
The recommended dose of colchicine for acute gout is:
The recommended doses of colchicine for FMF are:
Total daily doses may be administered in two divided doses. Doses should be increased by 0.3 mg daily as tolerated until symptoms are controlled or maximum daily doses are reached. Doses should be decreased by 0.3 mg daily if side effects occur.
Drug Interactions: Several drugs reduce the breakdown and elimination of colchicine from the body by reducing the activity of enzymes that breakdown colchicine. In order to avoid side effects from colchicine the dose of colchicine should be reduced when it is combined with or used within 14 days of drugs that reduce its elimination.
Examples of drugs that reduce the elimination of colchicine include:
Gout treatment with colchicine is at the end of the day still with us after all the medical advances and it is for each individual to decide (with their doctor’s approval) what and how they wish to approach the use of colchicine in a strategy for gout treatment.